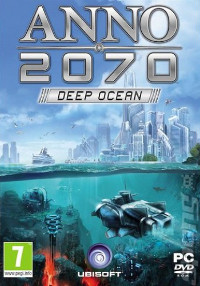 The sale of this product is suspended.

GamingMode information about the seller and his items
offlineAsk a question

Seller will give you a gift certificate in the amount of for a positive review of the product purchased.

To start the game Anno 2070 is required.

In the depths of the ocean, buried in the bottom among stones, Techno discovered the key to power and prosperity - geothermal energy. Underwater stations operating on this energy will be the main element of the game, and will build a lot of new types of industrial buildings.

This success will raise Techno to a new level - Civilization geniuses. Who was famous even overseas because of its delightful inventions.

Players will be able to effectively take advantage of the underwater world through diplomacy and trade. To continue to develop the economy, they need to control the underwater islands to lay submarine trade routes, grab blank board and build new buildings and monuments. But such progress also has its price. Problems in the geothermal power plants can cause devastating tsunami that can create big problems.

Erect a monument to techno and more than 30 new buildings.
Access to the new mode of transport.
New content for deep immersion in the game

Dive into the water and get more than 80 new items to help you develop your production, strengthen the economy and to open up new sources of energy.

Take advantage of geothermal power plants, allowing the island to supply your huge amount of energy.
Decorate Techno city through a variety of decorative buildings, from the fountains and ending holographic monuments.
New developments and tests

Perform more than 150 new jobs and pass a new campaign associated with the experimental energy source called Hiro IBASE.
Expand your territory by a hostile takeover online. Or build a strong economy and use this advantage to capture the peaceful islands of other players.
Master the natural disasters such as tsunamis, alone or with friends in cooperative mode.
+++++++++++++++++++++++++++++++++++++++++
A third (in random order), positive comments, to receive from us a gift (gifts handed out within 48 hours of the reviews) RANDOM

To install the game you need an internet connection and authorization when Steam.

Codes of cities and mobile operators

WOW Gold is available on all Ru Servers, do not pass BY

Lords Of The Fallen (Steam)